Home » Manitoba Route Guides » ROUTE GUIDE: How to Get From Winnipeg to Churchill (for 2022)

Churchill, Manitoba, often dubbed “the polar bear capital of the world”, is one of Manitoba’s most incredible locations. There are very few places around the world where you can see so many polar bears and beluga whales in the wild, so it’s no wonder that Churchill is such a draw for nature enthusiasts and wildlife lovers. There’s also a rich culture and history, Northern Lights viewing, mural tours, art galleries, and so much more to explore in Churchill.

From July to November, many tourists make their way to Churchill in order to see the polar bears, the beluga whales, or both, depending on the season. July, August, and September are known for spotting belugas in Hudson Bay and the Churchill River, although it’s still possible to see polar bears during these months, too. October and November are the most popular months for seeing polar bears, as they’re often quite easily found on the snowy tundra.

Seeing as it’s so remote, this tiny community on Hudson Bay has very few options when it comes to actually getting there, but you’ll most likely start your trip in Winnipeg, Manitoba’s capital city. Thankfully, there are regular plane and train routes from Winnipeg to Churchill during tourist season. Here, then, is everything you need to know about getting from Winnipeg to Churchill.

Manitoba is made up of Treaty 1, 2, 3, 4, and 5 Territory, as well as communities that are signatories to Treaty 6 and Treaty 10. Manitoba is home to the original lands of the Anishinaabe, Anish-Ininiwak, Dakota, Dene, Ininiwak, and Nehethowuk peoples, as well as the homeland of the Métis peoples.

Winnipeg to Churchill is approximately 1,000 kilometres as the crow flies, and the two are found at near north and south opposites of one another in Manitoba. However, there are no paved roads that lead directly to Churchill, making this route slightly more complicated than others in the province. If you plan on visiting Churchill, your journey will have to involve a train or a plane at some point; there is currently no way to drive a car or take a bus to Churchill.

If you do want to drive the majority of the way to Churchill, most people drive from Winnipeg to Thompson, and then take the train or fly from there. More on that below.

Winnipeg to Churchill by Plane

Without a doubt, the fastest and the most convenient way to get from Winnipeg to Churchill is by plane. Thankfully, there are many flights from Winnipeg to Churchill per week during tourist season, although air service is indeed available all year round. We highly recommend booking your flight well in advance of your trip, because flights fill up quickly, especially in polar bear season.

Calm Air is the best airline to get you from Winnipeg to Churchill (and, often, the only one). Your flight will depart from the Winnipeg James Armstrong Richardson International Airport and arrive at the Churchill Airport. Flying to Churchill from Winnipeg takes approximately two hours, but be prepared for inclement weather to possibly delay or even cancel your flight; you are travelling to the rugged North, after all!

If you end up booking a tour – we’re big fans of Lazy Bear Expeditions here at Road Trip Manitoba – your flight is often included in your package price.

It is also possible to fly to Churchill with Calm Air from either Thompson or Gillam, so another option is to take the train or drive to either location and then fly to Churchill from there.

Winnipeg to Churchill by Train

Feeling adventurous? A fantastic way to see Manitoba is to do so by train. VIA Rail Canada has a couple of trains per week that travel from Winnipeg to Churchill, and a couple of trains per week for the return trip. Just as with flying to Churchill, we recommend booking your train tickets well in advance of your journey. Be sure to check prices and book your train tickets via the VIA Rail Canada website.

Taking the Churchill train is usually cheaper than flying, but it’s always important to compare prices and plan ahead of time in order to find the cheapest way to Churchill. Be prepared to settle in and get cozy: the train from Winnipeg to Churchill takes approximately 48 hours, or two full days. But don’t worry… you’ll have gorgeous Manitoba scenery out your window to keep you entertained!

Another option is to take the train from Thompson or Gillam to Churchill. Some people drive or take the bus to either location, and then catch the Churchill train from there.

Winnipeg to Churchill by Car

Currently, there are no paved roads that lead all the way to Churchill. However, if you would like to drive for most of the way, many people drive to Thompson or Gillam and then fly or take the train the remainder of the way. Winnipeg to Thompson is approximately 760 kilometres, or around eight hours of driving, while Winnipeg to Gillam is approximately 1,000 kilometres, or about 11 hours of driving. It’s certainly an amazing way to see Manitoba, and you get to stop wherever you’d like along the way!

We have an entire guide on getting from Winnipeg to Thompson, including information about renting a car in Winnipeg.

Winnipeg to Churchill by Bus

Currently, there are no paved roads that lead all the way to Churchill, so taking a bus directly to Churchill isn’t an option. However, it is possible to take a bus to Thompson or Gillam and then fly or take the train from there.

Thankfully, there are multiple bus routes from Winnipeg to Thompson and Gillam. Prices and journey times will differ depending on the company, the day, and the time of year. We always recommend booking your bus journey ahead of your intended day of travel in order to find the cheapest price and best option for your trip.

Winnipeg to Churchill by Other Options

It is entirely possible to take a private transfer or tour from Winnipeg to Churchill; you’ll have to book a private charter flight in order to do so. Be prepared to pay, though, as it is extremely expensive!

Due to the ever-changing travel landscape in the age of Covid 19, we hesitate to recommend any specific charter companies or private tours, as they change daily. If this is something that interests you, we recommend reaching out to a travel agent that specializes in travel to Churchill.

Fun Things to do Along the Way

If you’re driving north from Winnipeg to Thompson or Gillam, and you’re not in a huge rush, there are tons of spots to explore along the way. After all, you have hundreds of kilometres of Manitoba to drive across! Here are a few of our favourite stops along the way:

Upon Arrival in Churchill

The Churchill Airport is very close to town – if you have a tour booked, they’ll arrange your transportation to your accommodation – and the train station is directly in town.

However you’ve chosen to get from Winnipeg to Churchill, once you arrive in the community, you’ll probably want to get something to eat or check in to your accommodation. Also, keep in mind there is also the Town of Churchill website for lots of tourist and travel information and advice on what to do in the “polar bear capital of the world”.

Where to Stay in Churchill

For places to stay, we recommend the Iceberg Inn, the Churchill Hotel, or the Bear Country Inn. All of these offer clean and comfortable accommodations ensuring you a good nights sleep so you can explore Churchill the following day.

For a more intimate a local experience book a stay at Sarah’s Dreamhouse B&B. They offer free pickup and drop-off at the airport and you’ll be treated to breakfast every morning.

There are also lots of specialty accommodation options in Churchill, including the Frontiers North Adventures’ Tundra Buggy Lodge, the Nanuk Polar Bear Lodge and the Lazy Bear Lodge – an authentic Arctic log cabin .

Where to Eat in Churchill

There are not many restaurants in Churchill, but there are some options for good quality eats. We recommend eating at the Lazy Bear Café, the Tundra Inn Dining Room and Pub, or the Seaport Hotel.

Planning to spend some time in the province’s capital before heading north? Don’t miss our guide on all the great things to do in Winnipeg. (Also, check out our article on our most beloved restaurants in Winnipeg as well!)

And if you’re making ANY drive in the province, don’t forget to download our FREE Road Trip Manitoba bingo cards to amp up the fun! 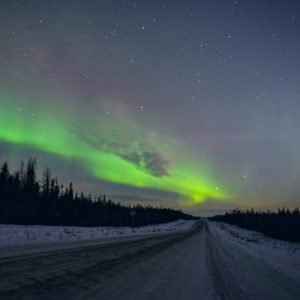 ROUTE GUIDE: How to Get from Winnipeg to Thompson (for 2022) 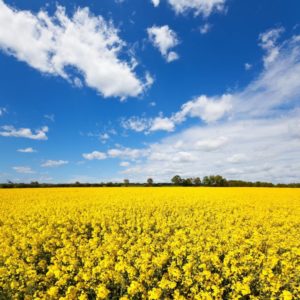 ROUTE GUIDE: How to Get From Winnipeg to Portage la Prairie (for 2022) 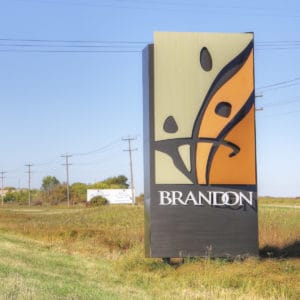 ROUTE GUIDE: How to Get From Winnipeg to Brandon (for 2022)

For such a small town, Gimli has so many great thi

"Cause a little bit of summer is what the whole ye

"Anybody can be good in the country. There are no